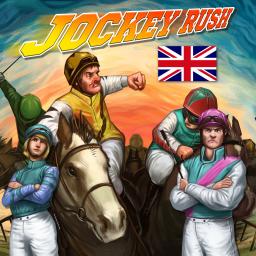 Be the champion jockey. Ride at over 50 worldwide racecourses. Boost your reputations and ride in the Gold Cup, Derby and many more. Win at all costs!

Runs on the iPad 3rd generation and later, iPad Mini2 and later and the iPhone 5 and later.

* Flat and jumps modes!
* Study the fields past performances and pick one of the trainers ride offers.
* Get the tactics right and time your challenge just right for a Jockey Rush boost!
* Realistic racing, odds and tactics. Created by the maker of the acclaimed 'Starters Orders' series of horse racing management game.
* Beat the trainers estimated finishing position for a reputation boost.
* Ride in hundreds of feature races from around the world.
* Handicap, claiming, group, conditions and selling races.
* Study the ride offers and choose the ride with the best chance of winning.
* Unique BATTLE MODE option. Resort to PUNCHING and KICKING your opponents off their mounts.

Requires a device with a minimum of 1GB ram.