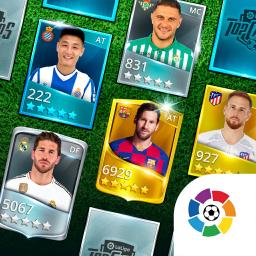 Download for free LaLiga Top Cards game and you will be able to collect football cards of your favorite players and become the manager of the best football team in the world.

LaLiga Top Cards 2019 is the newest Spanish football league fantasy manager style game. Enter epic card battles and be sure to arise as the best football manager on the game! If you like mobile football games and cards games, we got you covered!

- Collect the cards of the official football players of LaLiga Santander.
- Get more cards and level up your favorite football or football players.
- With your card deck, create the best team of football (spanish football) players possible to play football card battles online against other LaLiga Top Cards players.
- Set the best alignment and use the right tactic for each opponent.
- There are different game modes with different rewards. Choose yours!
- Once the football matches are over you will earn rewards. You can play a mini game to get more football players cards.
- Merge cards to improve attack, pass and defense stats.
- Get the players cards of all the football teams of LaLiga Santander.

- Daily Challenge: Events that allow you to evaluate the status of your team and check if you have the best players.
- Exhibition Games: Friendly games to train and get more rewards that will allow you to improve your football team.
- Leagues (coming soon): Temporary events with classifying tables. Will you get to the top and become the best football manager?
- Tournaments (coming soon): The KO competition that is held every weekend. Will you manage to raise the trophy?

Collect the cards of the real players of LaLiga Santander and build the best card deck. The only fantasy manager game with the original football clubs and players of the Spanish Football League!

Do not think twice, get your mobile phone ready and start your card collection to become the best football manager in the world!