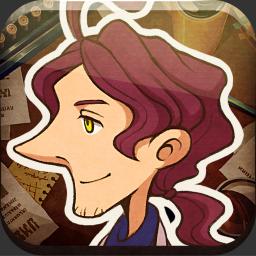 The latest game from the PROFESSOR LAYTON adventure game series that has shipped over 15 million units worldwide! LAYTON BROTHERS MYSTERY ROOM is a new crime-solving mystery game featuring none other than the son of the great Professor Layton!

Genius investigator, Inspector Alfendi Layton and his newly assigned assistant, Detective Constable Lucy Baker, research only the most extraordinary cases in the “Mystery Room” deep within Scotland Yard. Investigate the evidence, find the contradictions, and unravel the truth that lies shrouded in mystery!

■ Investigate the Crime Scene
Uncover the details behind each crime as you zoom in and examine suspicious objects to add them to your mounting list of evidence. Piece them together to form an airtight case!

■ Cut Through the Web of Deceit!
Expose the crucial contradictions in the case files as you match them with evidence that just doesn’t add up. Call in the witnesses and find out if they have anything to hide!

■ Face the Culprit in the Final Showdown!
These criminal masterminds won’t make solving their heinous crimes easy. Find the holes in their arguments until their lies shatter around them, bringing the truth of each mystery to light!

■ These Mysteries and More Await!
File No.001: The Hand Sandwich
A woman was found murdered at the seaside hotel of a bustling travel destination. Her asphyxiated body lies on the balcony with one hand inside the sandwich that was to be her last meal.
Who is guilty of murder? What is the significance of the sandwich?

File No.002:The Bungled Burglary
A man was murdered inside his apartment. Two suspects emerge based on eyewitness testimonies, but the murder weapon seems to have vanished into thin air.
Who is the perpetrator, and what kind of murder weapon disappears from a locked room?

Pricing:
Play the prologue, Case File No.001, and Case File No.002 for FREE!
Files 3 through 6 and 7 through 9 are available as two separate in-app purchases.

■ Alfendi Layton’s Secret
As you expose the contradictions and culprits throughout each case, you may catch glimpses of a drastic change that occurs in Inspector Layton’s personality… Uncover the truth of Layton’s condition by solving the mystery of all nine files!

LAYTON BROTHERS MYSTERY ROOM was featured in iOS Store on 2 placements in 中国 on 2018年8月19日.