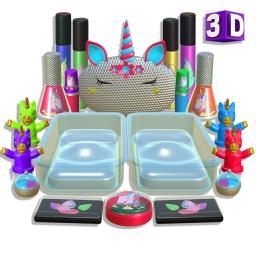 The #Slime trend is still rocking the new year 2019 with some more squishy & fun to do things including slime making using new and new things such as making slime without borax, making slime without glue or with glue. So we also bring this new game that makes DIY slime with makeup, can you believe that? Mixing makeup into slime, and yeah that will not let you mixing random things into slime but will also trigger the sensation in you. Try not to get satisfied with this new makeup slime maker experience that will prove to be oddly satisfying for you and give you chills. The bonus also includes making the new trendy iceberg slime that is covered with iceberg layer that you will love breaking before performing other fun to do squishing, stretching, poking, smashing and pressing #slime.