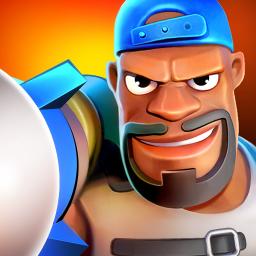 Who's the Mightiest?
Shoot, Deploy & Destroy in Real-time 1v1 Battles!
Clash with millions of players around the world in fun, fast-paced epic duels.

More than 4 million players have joined in on the action. Are you Mighty enough to reach the top of the leaderboard?

Mighty Battle is a free-to-play PVP battle game. Your goal is to DESTROY the enemy bases by SHOOT down the opposition units AND tower base. Deploy your squad of ARMY SOLDIERS, TANKS, VEHICLES, WEAPONS AND BASE DEFENSES to attack and counter.

More than 40 units to COLLECT and UPGRADE. Earn MEDALS and CRATES by defeating your opponents and advance in the global leaderboard for the mightiest honor.

Form a clan with your Facebook friends or battlers around the globe; share cards, discuss battle strategy and build the mightiest clan in the game.

FEATURES
* Engage in REAL-TIME multiplayer epic duels with players from around the globe
* Defeat opponents and earn awesome Crate rewards
* Open crate reward to UNLOCK new exciting units and UPGRADE your favorite units
* Advance through divisions to the top of the leaderboard, unlock new battlefields and units
* COMPETE in fun-filled EVENTS and EARN awesome rewards
* FUN, FAST and INTENSE gameplay that will test your strategic and shooting skill
* Form a clan with your Facebook friends or other players in the game
* Test drive new units and battle deck in stress-free TRAINING MODE