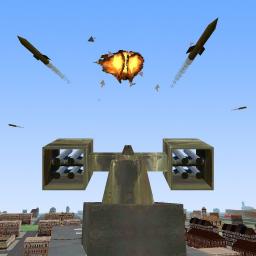 The enemy is launching a barrage of missiles on the city.
Aim and shoot with your patriotic missile on enemy missiles to neutralize the threat.

The patriotic missile is equipped with a search and destroy system,
but still the gunner's expertise is vital to decide when and at what angle to launch the missile.

If the enemy missile passes close, may be necessary seek a direct collision.
To do this, hold down the shoot button, this will disable enemy search in the launched missile,
although you can activate it at any time by releasing the shoot button.

Various missions, where you need to shoot down enemy missiles, bombers
and helicopters that will attack you continuously.
You have several anti-aircraft missile batteries distributed in various parts of the city,
you can switch between them at any time to choose the best position from which to launch the patriotic missile.