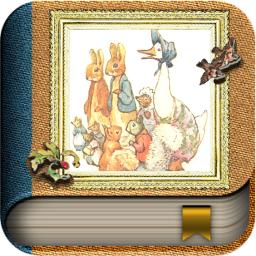 Wonderfully updated Beatrix Potter books, with graphic adaptations of there wonderful illustrations come with option "Read to Me" or "Read Myself". They are accompanied by soothing background music. There are also activity pages that come from the illustrations that can be colored, printed, saved and/or shared via email to your family and friends.

Peter Rabbit- Wonderful told tale, loved for 100 years by children the world around. The story follows Peter after he disobeys his mother and goes to Mr. McGregor's garden instead of going to pick blackberries with siblings: Flopsy, Mopsy, and Cotton-tail. Mr. McGregor tries to catch Peter, but he narrowly escapes. To get home safely, Peter must run past Mr. McGregor and get to the gate. He slips safely under the gate, but he has lost his jacket and his shoes. He runs home, where his mother puts him to bed and gives him a dose of chamomile tea.

Benjamin Bunny- The Tale of Benjamin Bunny is the fourth book made in Beatrix Potter’s “Peter Rabbit” series. The story, follows Peter’s cousin Benjamin as he convinces Peter to come to Mr. McGregor’s garden to get Peter’s clothes back. This tale is a great follow up to the classic “Peter Rabbit.”

The book starts off with Benjamin Bunny watching Mr. and Mrs. McGregor going out for the day and he decided to get his cousin Peter to come along with him to Mr. McGregor’s garden to get Peter’s clothes back.

Jemima Puddleduck- Jemima is a duck living on a farm whose eggs are always taken by the farmer's wife because she believes Jemima would be a poor mother. Jemima searches for a place away from the farm where she can hatch her eggs without interference, and naively tells her woes to a suave fox who invites her to nest in a shed at his home. Jemima accepts his invitation, little realizing her danger: the fox plans to kill and roast her. Kep, a collie on the farm, discovers Jemima's whereabouts and rescues her just in time.

Flopsy Bunnies- Yes, this is how Beatrix Potter spelled their name! The Flopsy Bunnies are sometimes careless when they've stuffed themselves with lettuce, and this time, it endangers their very lives. That old Mr. McGregor, he really hates bunnies in his garden, but he doesn't mind selling their skins for tobacco! How will Benjamin and Flopsy's "one, two, three, four, five, six leetle bunnies" escape from Mr. McGregor's sack? Book is filled with these strange old english words, but that is part of the fun of the story.

Thank goodness for Thomasina Tittlemouse, who arrives just in time to save the day! And those spunky Flopsy bunnies, they are more curious than they are scared (or are they more reckless?), because they follow Mr. McGregor right up to the windowsill of his home to see what happens next!