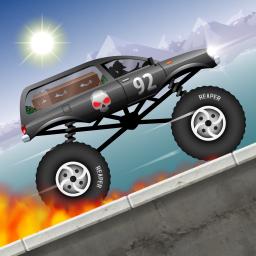 The hit online game with OVER 180 MILLION PLAYS has made its way to mobile, bigger and crazier than ever before -- and now with multiplayer!

Compete in 1v5 multiplayer races and climb your way up the arena tiers. Each new tier you unlock will give you access to new levels: from the peaceful Docks, to the trap-filled caves of the Ice Caverns, to the fiery Devil's Island and to more new worlds coming soon!

Unlock and upgrade over 10 crazy cars, including a sleek police car, a Not Doppler bus, a tank, and a monster truck hearse (don't ask...)

Want to show off? Complete missions and upgrade your vehicle to unlock 16 different power-ups and a range of vehicle skins.

Don't forget, this isn’t just a game about driving. Performing stunts is key to your success! Every stunt you perform improves your turbo, allowing you to speed past your opponents to victory!

查看评价和评级，了解用户对 Renegade Racing 的看法。
4.5
165 条评价
Great game but now what?
So I’ve been through all the levels. Upgraded all the vehicles. I keep playing just build up money? Seems like a Loop now
Renegade Racing
This game sucks it won’t stop freezing and making me miss out on a lot of stuff I’ll be deleting it today
“Mind Blowing”
This game is my childhood game i played this like 2013 i rlly like it!
Not enough people
There isn’t enough people to start a game so you can’t play at all...
Pls allow people to log in from other social media
Pls allow people to log in from other social media such as Instagram cuz if a person doesn’t have Facebook or an account they could sign in from social media they do have, like Instagram thx so much if do that