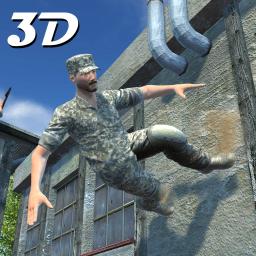 Welcome to the world of secret agents and US Army Military Training School where spies operate under the radar and deploy to locations around the world to complete secret army missions. You are the new secret agent sleuth, recruited and trained by the military's secret service agency to ensure the security of your nation. Operate under cover to complete secret agent missions without being discovered in this challenging spy stealth game. Trained as a ghost spy for top secret missions, you'll move quickly and quietly to destroy enemy military bases.
Test your physical fitness and mental discipline by playing this obstacle-based fun game. But be aware that it’s not easy to become a soldier of the National Guard — you must clear a rigorous assault course. And remember your uniform represents your honor—don't get it dirty or muddy!
Conquer obstacles across different army courses and terrains like dense tropical forests, freezing arctic snow fields and blistering hot deserts. Escape the high school life and plunge into the craziest park our obstacle courses and army bases have to offer. Can you jump over a ten foot wall, swim in freezing arctic waters and climb assault nets in the desert heat? You'll need to be mad and more than a little crazy to get through this game in one piece! Become a one man strike force and face world armies to prove which country's army forces are best: USA or Russia? India or Pakistan?
As a ghost agent you will train as hard as you can to be sure you can defeat the enemy by working undercover as a top secret agent to destroy enemy bases. Training missions show elite spy skills and how to stop the enemy stealing blacklist files. Save fellow spies with your military and secret agent training. Be the elite spy and complete exciting missions by destroying different targets like enemy helicopters, trucks, buildings and command centers.
Once fully spy trained you'll be ready to execute dangerous operations in enemy bases — but keep
absolute silence or you'll trigger the alarm and get caught! Some might say it’s an impossible mission, but the secret service agency wants to complete this army mission by sending the best secret agent spy in this stealth military game. And this is you! Never before have such challenges been seen in secret agent rescue games.
Enjoy the latest action game with army basic combat training covering different army posts. Enter the strenuous boot camp and get in line for the first call for military training, but always remember your uniform is a sign of your honor and avoid getting it dirty! Play as a new recruit in the platoon and follow the chain of command over rough terrain. Enjoy some wipe out and ninja warrior games by challenging your family and friends to beat your score on the game leader board. Exhibit fitness with physical training and mental training by following the drill sergeant's orders. Complete military training camp by passing the commando battalion test in this action packed simulator game. Master intense obstacle courses and follow orders from platoon instructors. It might be easy to build 6 pack abs and get fit in the gym, but it’s a hell of a job to pass this special forces operations course. Show real discipline and physical fitness by climbing tactical nets and ten foot walls and much more while
all the time drilling, grounding and grinding to enhance your Marine soldier skills.

Secret Agent Training Spy Game was featured in iOS Store on 1 placements in 中国 on 2017年6月8日.