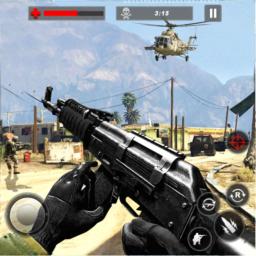 Sniper Shooter Modern Battle game is an extremely challenging game developed for experienced us army sniper shooter. This critical army terrorist game will amaze you with its realistic battlefield surroundings and by exciting gun shooting adventure. You can play as a member of the anti-terrorist squad by fighting against terrorist attacks.

You would have to play as a frontline commando for defending your country and people. Fear and terrorism are spreading everywhere, you are the last hope. Use your smooth shooting experience in this us army sniper combat arena for fighting against the terrorists. Be a hero of killer games by fighting bravely against terrorist attacks. Mountain sniper is waiting for you, if you take any wrong step you would be killed on the spot.

During gunfighting you have to focus on your enemy targets while holding your breath, if you are spotted by your enemy, they will kill you in no time. Be the best command of killer games, shooting guns should be toys for you. Be a fearless mountain sniper with free gun games, and prove that you are the terror for sniper enemy by shooting them at the spot.
There are multiple deadly weapons buy them and prove that you are the best shooter of all 3d shooting games 2018. Make the proper strategy for fighting with your enemies to counter terrorists and for avoiding their army attack. Manage your time and aim precisely on your target. Shot the critical army sniper before he makes any moves for killing you. Use all the tricks which you learned during us army training sessions for eliminating all the terrorists coming on your way.
Deadly terrorists have made some hostages, use all your us military training skills for realizing them from the gangsters. Gangsters mafia are wandering in the city for disguising the citizens in us army costume. Your duty is to find the crime mafia and shot them for saving the citizens from their curse. Make new records by killing maximum terrorists for survival and move forward according to you plan strategy. Army sniper combat is not an easy fighting arena, it needs all your senses for your survival and you would practice this all in this best counter-terrorist game.
Jump into the world of crime and terrorists, take an aiming position at the secure location for making the precise focus on the counter terrorists targets. Move steadily towards finding your targets. Aim precisely and shot them without wasting any time. Unlike other free gun games and sniper arena, this shooting game 2018 is full extremely challenging shooting games.

It's time to play the best counter terrorist game for extreme challenges and fun.