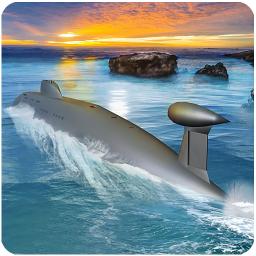 Feel the extreme of real navy war and experience lethal submarine battles undersea gameplay with full of action and strategy. Attack your enemies to destroy their ships through 3D submarine simulator and lead the Russian war. Cruise underwater engage to shipwreck destroyers, cruisers, vessels with missiles in the open sea submarine war game.

Before starting the naval warfare and submarine attacks, you need to first listen to your commander in order to win this submarine battle. Once you get the orders for submarine war you silently submerge your submarine beneath the water surface to prepare yourself for naval warfare. In case you are in danger, commander order your U-boat simulator crew and navigate you out submarine war.

Encounter Russian wars with your highly alerted targeting skills. To protect yourself from submarine attack, try not to come on the water surface and going deep into mine traps and play the submarine battle with fully armed U-boat simulator having heavy torpedo missiles for bombardment.