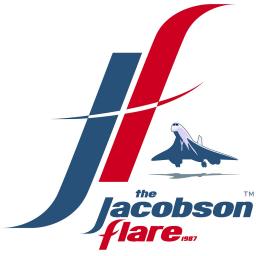 Since 1987, the unique application of The Jacobson Flare has eliminated the imprecise aspects of landing an airplane, otherwise unchanged since the end of World War 1 in 1918. Everything else in aviation has advanced, but NOT landing training. Historically, the manual landing manoeuvre has remained indeterminate. Conventional flare techniques have involved an inconsistent, critical estimation of height above the landing surface and are subject to a number of variable factors, summarised as aircraft, pilot and environmental.

The Jacobson Flare is the first and only quantifiable, universal and consistent landing technique in the history of aviation. To land an airplane consistently well, a pilot should be able to explain the following five questions:

The Jacobson Flare App for the iPad, originally featured in June 2014 on the Australian App Store in ‘Best New Apps’, answers all five applying, clearly and simply, known principles and facts that enable a pilot at any level of competence and experience to finally and fully understand HOW to make safer and more consistent landings, in any airplane type. The noted increase in pilot competence and confidence is breathtaking.

Professionally designed, the Jacobson Flare app for iPad is so much more than the simple equivalent of a 330-page book; interactive and inclusive, it totally replaces and greatly enhances successive and widely acclaimed presentations of the original 1987 Jacobson Flare paper, “Where to Flare” and other associated files.

This updated Version 2.0 of the Jacobson Flare app explores the where, when & how involved in landing an airplane in TWO DISTINCT PRESENTATIONS:
•Designed in LANDSCAPE as an extensively illustrated comprehensive presentation, with accompanying text; and
•The Jacobson Flare TREATISE, now re-worked in Landscape and partly illustrated, designed as an e-book, for uninterrupted reading and comprehension of the complete text.

These are best viewed in landscape on at least the screen size of an iPad Mini OR larger iPhone.

Graphically enhanced HD videos of various airplane types using the same consistent and quantified technique, at a diverse range of locations, highlight the Jacobson Flare app for iPad as a perfect solution to a serious long-term problem for world aviation. Thirty-five years of research and development are reflected in the intuitive design, fine production and attention to detail - just some of the hallmarks of this stylish presentation.

The Jacobson Flare has been adopted enthusiastically by thousands of pilots in 65 countries. The convenient digital format on iPad has accelerated industry awareness and acceptance and offers predictable and consistently better landings for those individual pilots, at ANY level of experience, who are always seeking to improve their skill set.

Perhaps the three best descriptions come from highly experienced professional pilots: “the greatest single advance in flying training in many, many years and represents simple unassailable aerodynamic logic”; “this is probably what we have all been trying to do all these years”; and “this has the elegant simplicity of the safety pin”.