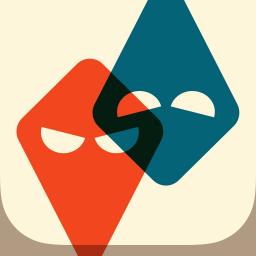 Two Spies is a turn-based spy training program where you face off against an opponent in Cold War Europe. Sneak to gain cover, control cities' informants to capture areas of the map, deduce your target's location – or trick them into revealing it – and strike to win the round.

- Board-game style maps
- Training bot helps you learn the ropes of being a spy
- Play matched games against opponents online
- Get a Season Pass to see player ranks, access stats, and earn pro pins
- Play a friend in local wireless, "pass and play", or internet play
- Realtime turn-based gameplay
- Collect spy pins to show your opponents who they're up against
- Trick your opponent by doing what they least expect
- No consumable in app purchases or "pay to win" mechanics
- Based on a lost cold war spy training program

"A thrilling game of espionage"
- App Store "Game of the Day" feature, April 2020

"A great turn-by-turn game with just the right amount of chance thrown in"
- Steven Hackett, 512 Pixels