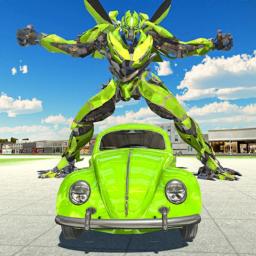 Welcome to Ultimate Car Robot with transform robot simulator features. Frustrated by robot transforming games or transformation robot games? Don't be upset, in this season Turbo Wingz comes up with a new robot car having multi robot levels to kill robot enemy in the overwhelmed robot city. Transform robot games with intense shooting & action packed thrilling mech warrior will give you the extreme experience of robot wars. In this century where robot technology is increasing day by day and the countries are producing modern weapons, the robots will now the new army weapons which will fight as a country defender as in robot simulator games. Super robot will fight against enemy robot attack. Upgrade your robot for futuristic robot battle and be the best robot shooter in this best robot games on the play store. Muscle car transformation robot will allow you to be a mech robot or super mech to fight & crusade enemy attack. The robot wars have begun and the robot fighters of the planet will defend the war robot for the survival of mankind in robot transform games.

This Ultimate Car Robot is developed to learn how to prepare your robots for the modern war of robots. Jump into this amazing robot games and experience the mech robot fight for the peace of the country where US Police & Us Army failed to fight against evil robots. Futuristic robot battle is only the hope for the entire country to get rid of robot wars which destroyed the whole world in robot transforming games. Muscle car robot or bumble robot is coming to crusade robot attack from another planet. So you are going to control this car robot and will demolish every robot attack. This transform robot simulator is not only for the high age people it is for all the generation who love war robot games.