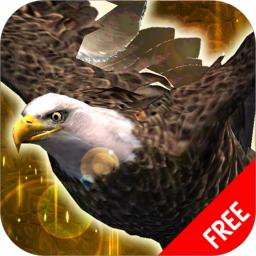 The most exciting battle of the bird of prey , bald eagle or white headed eagle has begun in a faraway island full with dangerous from fierce , scary and frightening wild animals in many species . Only the strongest one will survive and become the ultimate king of the animals . To play this game is just to control eagle to fight or attack via joystick . This is realistic simulator game of wild animals fighting for survival has begun !!!
In this dangerous island is full of fierce and frightening wild animals in many species such as Tiger have sharp teeth for biting and tearing flesh meat , Lion or the king of the jungle which is fierce carnivore , fox is clever and nimble , Leopard is able to climb trees and many more living this island . The strongest one will survive in this land . It is necessary to hunt , kill , the enemy as much as you can to become the ultimate animal and also have to eliminate the giant boss in each zone .
Eagle is the beautiful strong hunter with vast wings that fly flight so fast, has great eyes to see farther and it is also the faith symbol of Indians . It is a bird that eats small wild animals such as snake , rat . It is related to bird of prey such as falcon or hawk . The eagle is main character of this free simulator game .