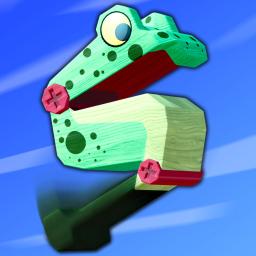 ** From Walaber, the creator of "JellyCar" and lead designer of "Where's My Water?" comes a new mobile physics platform adventure! **

Take control of the Wobble Frog, a strange Toy "Frog", and adventure through an endless stream of challenging levels.

The controls will seem difficult at first, but stick with it, ask Professor Bubbles a question or two, and you'll be wobbling in no time!

SIMPLE CONTROLS - 100% physics based gameplay with just 2 on-screen thumb sliders
CHALLENGING OBSTACLES - tons of physics contraptions to overcome
CUSTOMIZE YOUR FROG - unlock tons of customizations for your "Frog", including new shapes like Dog, Cat, Duck, and more
RACE AGAINST FRIENDS & RIVALS - compete in the weekly speedrun for leaderboard glory, including "ghost frogs" of the players near you in the leaderboard