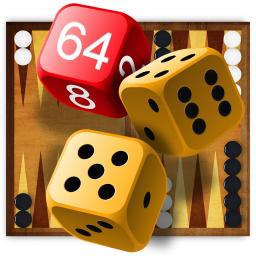 The premier backgammon game for the Mac since 2003. You can choose from more than 30 beautiful board styles created by several graphic artists. It supports game play in 6 languages: English, German, Italian, French, Spanish, and Dutch.

Works with OS X 10.6 to the latest version (now Sierra)

The game contains all of the options and features to play the game your way, including 7 different ways to move the pieces and 5 skill levels for all levels of play. You can even play using your voice.

It also has a Tutor mode that will help players learn to be a better player faster.

•Very easy to use
•Excellent support at absolutegammon@aol.com
•Mature program - first released in 2003 and has been improved continuously ever since
•Play against the Computer
•Play against another person on the same computer
•5 skill levels, providing a challenge for all level of players
•3 personalities: Normal, Aggressive, or Conservative
•Supports game play in English, German, French, Dutch, Spanish and Italian
•Can play a match of any number of games with the match saved so it can be finished later
•Choice of 7 methods to move the pieces
•Can use the Speech Recognition built into OS X to play a game
•Has a Tutor Mode to help beginners to intermediate players
•Fast computer play
•Piece movement is animated - pieces DON'T just appear in the new location
•Can pick up multiple pieces at once
•Easily take back as many moves and doubles of the cube as you wish
•Use the voices built into OS X
•Digitized sound effects
•Gives suggestions for moves
•Gives Doubling Cube Advice
•Save your game to finish later
•Switch board direction and colors
•Setup any board situation.
•Helpful messages during play using speech & text
•Select from over 30 beautiful board styles and sizes
•Add comments when saving a game for later recall
•Concede games
•Change the speed of piece movement
•Select number of automatic doubles
•Beaver option supported
•Jacoby rule optional
•Option to not allow backgammons
•Option to have winner roll first
•Easily (1 click) display pipcounts and remaining rolls for both players or have it displayed continuously
•Automatic Rolls of the dice for faster play
•Choice of shorter dice sound for faster play
•Instant replay of computers's last move
•Option to show possible moves when a piece is picked up or when a piece is passed over
•Select to pick up either 1 piece at a time or multiple pieces
•Keeps game and sessions statistics as well as running/cumulative statistics.
•Option to automatically make moves for you if there is no choice.
•Can take advantage of a 2 button mouse.
•Can print the details of the game
•Can save a picture of the board during play
•Can choose to have the dice, to be used in the game, saved to a file before the game starts
•Can select to use the computer's dice rolls instead of yours (for those that think the computer gets better dice rolls)
•Can select to continue a game that has ended due to the doubling cube being declined or the game being resigned/conceded
•Plus more...