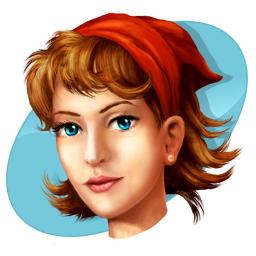 A mysterious ghost story, a gripping thriller, a historical adventure:

Virginia and Professor MacNara, a famous archaeologist, come upon a 500 year-old galleon on the beach of a deserted village. The ship, laden with a mysterious artefact, belonged to Christopher Columbus, discoverer of America, and was thought to have simply vanished. Strange, everything on board looks as though the mighty ship was abandoned only yesterday. The ravages of time do not appear to have left a trace ...

When Professor MacNara inexplicably dies, Virginia begins to pierce the veil of these mysteries in her search for the murderer. It seems the ship is only one piece in a mystical puzzle about a time long ago.

Check out the trailer to see the game in action: http://bit.ly/mEXxJx

AND OUR MATCH 3 GAMES