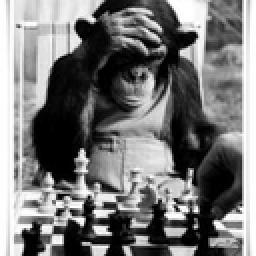 Chess is played on a square board of eight rows (called ranks and denoted with numbers 1 to 8) and eight columns (called files and denoted with letters a to h) of squares. The colors of the 64 squares alternate and are referred to as "light" and "dark" squares. The chessboard is placed with a light square at the right-hand end of the rank nearest to each player.

By convention, the game pieces are divided into white and black sets, and the players are referred to as "White" and "Black" respectively. Each player begins the game with 16 pieces of the specified color, which consist of one king, one queen, two rooks, two bishops, two knights, and eight pawns. Each of the six piece types moves differently. The most powerful piece is the queen and the least powerful piece is the pawn. The objective is to 'checkmate' the opponent's king by placing it under an inescapable threat of capture. To this end, a player's pieces are used to attack and capture the opponent's pieces, while supporting their own. In addition to checkmate, the game can be won by voluntary resignation by the opponent, which typically occurs when too much material is lost, or if checkmate appears unavoidable. A game may also result in a draw in several ways.

Chess is believed to have originated in India, some time before the 7th century; the Indian game of chaturanga is also the likely ancestor of xiangqi and shogi. The pieces took on their current powers in Spain in the late 15th century; the rules were finally standardized in the 19th century. The first generally recognized World Chess Champion, Wilhelm Steinitz, claimed his title in 1886.

Chess games may also be played with a time control, mostly by club and professional players. If a player's time runs out before the game is completed, the game is automatically lost (provided his opponent has enough pieces left to deliver checkmate). The duration of a game ranges from long games played up to seven hours to shorter rapid chess games, usually lasting 30 minutes or one hour per game. Even shorter is blitz chess, with a time control of three to 15 minutes for each player, and bullet chess (under three minutes). In tournament play, time is controlled using a game clock that has two displays, one for each player's remaining time.

How to play chess?
- The king moves one square in any direction. The king has also a special move which is called castling and involves also moving a rook.

- The rook can move any number of squares along any rank or file, but may not leap over other pieces. Along with the king, the rook is involved during the king's castling move.

- The pawn may move forward to the unoccupied square immediately in front of it on the same file, or on its first move it may advance two squares along the same file provided both squares are unoccupied.