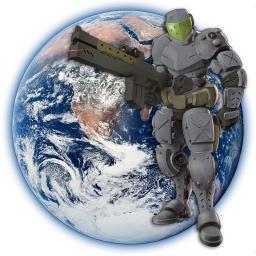 Swiftly, silently through space it slides… the giant, extraterrestrial being known only as Doomsday Odious devours planet after planet, as entire species all at once fall prey to its ever-hungry pseudopods. And now, it draws near to Earth.

You are Earth’s best hope for survival: the one they call Laserface Jones. Your mission is the oddest odyssey into and through the guts of Doomsday itself, where you must destroy it from the inside. Fail, and Earth falls.

• Equip and upgrade your arsenal of weapons to help you ANNIHILATE THE ALIEN MENACE.

• Fight your way to the brain of Doomsday Odious and DESTROY THE CORE.

• Hone your skills in Easy Mode with INFINITE CONTINUES, and then try your luck in Hardcore Mode where the scores are double!