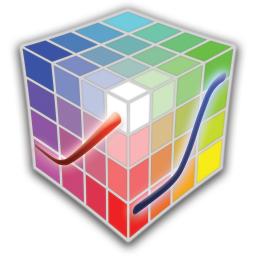 An App for generating, analysing and previewing 1D and 3D Lookup Tables (LUTs) for video cameras that shoot log gammas.

LUT Generator:
* LUTCalc understands almost all log flavours in use today, plus standard gammas such as Rec709 and manufacturer-tuned versions. Log and conventional gamma data has been taken from manufacturer-published documentation or standards papers.
* LUTCalc can produce accurate exposure adjustment LUTs for use in post where a simple tool is often not currently available, such as with Sony's CineEI.
* Convert between any of the included log and conventional gammas or to one of a number of creative looks modelled after those available in camera, either as a 1D tone curve only conversion, or as a full 3D colourspace conversion (such as S-Log3/S-Gamut3.cine to Rec709(800%).
* Change the input settings but not the output settings as a base when working with different camera models on a multi camera shoot.
* Customise looks to taste, from simple black level and saturation adjustments to more complex effects such as desaturating specific colour ranges.
* Adjust colour temperature either by CTO / CTB as with gels or by source and desired colour temperature.
* Plus Green / Minus Green slider to correct for fluorescent lighting.
* Take white balances from test images.
* Output to any of a number of common LUT formats, automatically adjusted for the intended use (MLUT or specific post software).
* Produces MLUTs suitable for loading directly into Sony's cameras (as User 3D MLUTs), with other in-camera options in development.

LUT Analyser:
* LUTCalc provides detailed exposure information about any look it generates, such as the recorded levels for absolute black, a correctly exposed 18% grey card or 90% white card and others. It takes into account any adjustments and tweaks that have been made. The levels would ensure that when working to a monitor LUT the log recording would be correctly exposed as designed.
* Charts show the tone curves for the recording and the output, plus indicate the absolute dynamic range of the camera - black clip and white clip - where it is known.
* The 'LUTAnalyst' tool can read LUTs in a number of formats. Where the recorded log and colourspace flavours it is designed for are known it will attempt to convert it for use as with any of the built-in options, and provide the same exposure and tone curve information.
* A 'False Colour' option can be used to generate accurate, log-curve specific exposure assistance MLUTs where it is not available in camera. Just don't bake it in!
* Full instructions and details of all options are provided.

LUT Visualiser:
* LUTCalc includes a number of built-in test images with charts such as high contrast and low contrast, greyscale and full colour gamut along with the option to load a .png, .jpg or .bmp.
* Waveform, vectorscope and RGB parade scopes.
* xy / uv Chromacity preview image displays the recorded and output gamut triangles and white points, incorporating adjustments.
* Tone curve charts as stop in / recorded level out, linear in / linear out and LUT in / LUT out.
* Provides 10-bit RGB readings from the Preview image.

A free to use online version is available at www.lutcalc.net for testing in any recent browser. File saving options are limited and there is no capability for running offline and quickly from disk, but all the base capabilities are there for testing.

LUTCalc has been developed by a cameraman with over 25 year experience for his own work and LUTs produced have been used extensively on commercial projects. It continues to develop as new shoots reveal new needs.