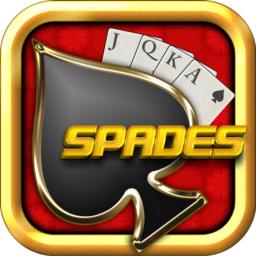 Spades is a partnership trick-taking card game, played with a single deck. The player opposite you at the table is your partner. Your opponents are seated at your left and right.

Spades raises the bar on graphics and interactivity in card games, to offer a simple, fun, and beautiful experience.

Spades can be played as either as a partnership or solo/cutthroat game.

The objective of spades is to take at least the number of tricks (also known as "books") that were bid before play of the hand began. Spades is a descendant of the Whist family of card games, which also includes other games. Its major difference as compared to other Whist variants is that, instead of trump being decided by the highest bidder or at random, the Spade suit is always trumps, hence the name.

Each hand in spades begins with all 52 cards being dealt to the players. The first dealer is chosen by a draw for "first spade" or "high card", and thereafter the deal passes to the dealer's left after each hand. The dealer shuffles, and the player to the right is given the opportunity to "cut" the cards to prevent the dealer stacking the deck. The entire deck is then dealt face-down one card at a time in clockwise order (with four players, each player should receive 13 cards).

Each player bids the number of tricks they expect to take. As Spades are always trump, no trump suit is named during bidding as with some other variants. A bid of "zero" is called "nil"; the player must bid at least one if you don't want to bid "nil". Spades may not be led until either some player has played a spade.

Once the full hand has been played, the game is scored. If the bid for a team is met, each trick counts 10 points, with any additional tricks (sandbags) worth 1 point. If a bid is not met, each trick in the bid is worth -10 points. If a nil is bid and met, the team gets an additional 100 points. A won double nil gets 200 points. When either of these are not met, the team will get -100 and -200 points respectively. Once 10 sandbags are reached, the team looses 100 points and starts over with 0 sandbags again.
Once the score is tallied after each hand, another deal begins. The first team to 500 points wins!

Use the power of your Spades to take the most tricks for your team.

This game of Spades is all set to have you hooked on for hours.

Do you have what it takes to be the Spades Champion?

So what are you waiting for? Download now and have hours of endless fun!

Please Rate and review Spades and help us bring out more games you enjoy.

We value your opinion, please post your Spades queries.