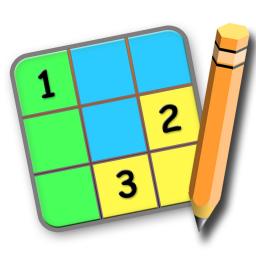 * Normal Mode: Basic Sudoku Rules.
* Jigsaw Mode: Regions are in arbitrary shape.
* X Mode: Each of the Main Diagonals can only contain one occureence of a number.
* Jigsaw-X Mode: Combination of Jigasw mode and X mode.
* Even-Odd Mode: brown cells contain only even digit, green cells contain only odd digit.
* Hyper Mode: 4 extra square regions must contain only one occurrence of each digit.
* Anti Diagonal Sudoku: each diagonal has at most three different digits.
* Consecutive Sudoku: all the places where adjacent cells are consecutive numbers have been specially marked.
* Non-Consecutive Sudoku: no two adjacent cells have consecutive values.
* Argyle Sudoku: every marked diagonal line contains each digit not more than once.
* Anti-King Sudoku: neither orthogonally nor diagonally adjacent can have equal digits
* Anti-Knight Sudoku: all cells at a chess knight move (at a distance of 2 by 1) must hold different digits.