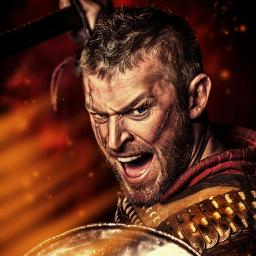 The Barbarian is a Top Down Action RPG with an open world storyline. Choose your class and over time specialize with dozens of skills and spells. You can't get them all, so choose wisely based on your playing style. Hundreds of enemy types, hordes to kill. Quests to complete, traps to avoid and puzzles to solve.

The game is designed for Gamepads, so you can easily move around, rotate the camera and do all your actions. However it also works easily with keyboard & mouse.

Days of highly re-playable gameplay, allowing you to choose different characters, different skills & spells, and even completely different paths through the world. Will you maximize your character to inflict massive damage? Or will you solve the main quest as quickly as possible, cutting corners and ignoring less important quests?

There's a huge array of weapons and armor to equip, each potentially carrying powerful bonus modifications. You'll find them in chests throughout the game but also in the towns shops, where you can sell what you find and buy new stuff, if you have the gold.

"Your home has been destroyed by an unknown adversary. You've arrived in a strange land..."