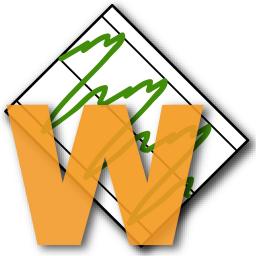 WaveWindow is a software oscilloscope. It's useful for anyone who works with sound on the Mac; it's educational and fun to play with.

Checking this item places a grid on the display. Tick marks are placed along the horizontal axis. The distance between two tick marks is called a ‘Division’. The unit of time represented by one division is shown on the WaveWindow display. Example: Horz 1.33 mSecs/Div

The vertical axis is represented by a solid line at the midpoint and a dashed line midway between the vertical limits. (Grid lamp is fairly meaningless in Lissajous mode.)

Dots - A dot is plotted for each sample data point.

In Lissajous mode, a sine wave is substituted for the standard 'sawtooth' wave applied to the horizontal input. The frequency of the Lissajous horizontal sweep frequency is 220Hz (set Horizontal Scale to 1x when using this mode.)

Lissajous figures are of primary interest in viewing frequencies which are integer ratios to the sweep frequency. The figures thus produced can actually be used to determine the frequency of the input, by looking at the resultant pattern, and comparing it to a table of known patterns for given frequency ratios. For our purposes, it is interesting enough just to play some notes and watch the patterns. Generally, you should be in Async mode when using Lissajous Figures. Play an 'A' on your instrument and observe the resultant pattern.

'Synchronizing' means 'to get in step with'. Consider what happens when the waveform being displayed does not repeat precisely at the fixed interval... The waveform can appear to 'travel' across the display, either backward or forward. This is a common on all oscilloscopes. To make the waveform appear to stand still, synchronization may be employed.

Async - Async means no synchronization. It can sometimes appear as if there are several waveforms on the screen, even though there are not. This is a result of the screen being erased and redrawn faster than the eye can discriminate.

Sync - There are actually many different ways to synchronize to an incoming signal. No method works in every situation. The sync mode employed here delays the incoming signal until a positive-going, zero-crossing is found. Zero-crossing is where the signal crosses the vertical axis at 0. Positive-going means that the signal is crossing from below the axis to above. Very often this will be a correct place at which the waveform repeats a cycle, but not always.

Capture - This sync method uses a bit of 'fuzzy-logic' to determine if the signal is perhaps a 'pitched' sound. When it finds something that looks like it may be some sort of musical note, it holds it on the display until the next musical note is found. This can be useful for a hands-free operation where you play a note, then be quiet, and the wave will stay on the screen. Of course, the display will not change at all if WaveWindow cannot find a 'musical note', so if the display seems to have 'locked up' make sure you are not in Capture mode.

A number of different color sets are provided for your viewing pleasure. Experiment to find the best color combination for your monitor.