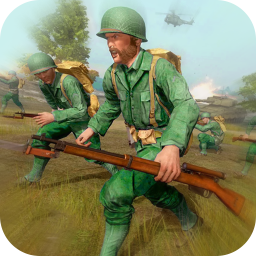 Counter Terrorist Fort Night War :
Gear up to play Counter Terrorist Fort Night War in the real action packed 3D shooting environment. In this counter terrorist fort night world war game, army counter shooter survival shooting mission will let US Army counter shooter war hero land into destructive land and fight in last day at war shooting game for survival in army fps shooting game. Your mission is to fight with the terrorist in form of Russian army soldiers, they are here to dodge you from this fort night battleground. You have to save the pride of your nation and make sure about your survival in this challenging mission. Get ready to take on the challenge and jump into an action adventure that will take you behind enemy lines into the most fierce battlefield of the century.
This is the time to show them what we exactly are and what we can do to beat them. You have different weapons like Pistols, SMG, Rifle, Sniper, Grenades and RPG to destroy the army base camps.
Be the best army commando to save your nation and show them your real fps shooting skills to defeat all the terrorists out there. Make your nation proud.
Good Luck!