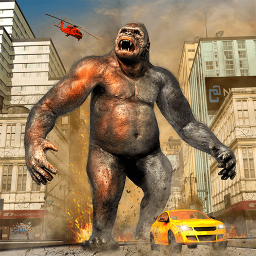 Monster Rampage Games says hello to happy gamers in bigfoot monster rampage in gorilla games while we welcome you to a new set of mad gorilla games with the flavour of smasher games mixed with giant monster games and giant rampage games with city destruction games where you have to destroy city in a smasher city series of city destroyer games. Real gorilla has been taken away from his gorilla family by evil scientists, in this unique addition to super hero games, who want to carry experiments on the poor animal to develop a pathogen for mutants which would cause a monster rumble in city when the bigfoot monster hits the streets. You got to make sure the real gorilla makes it out the of the lab first and then reunite with its family back in the jungle. The angry gorilla is in a very bad mood and is on a rampage of city smashers where your wild gorilla with overcome any force to become labelled as the ultimate gorilla amongst the wild gorilla we usually see in king kong games, bigfoot games when the monster city rampage reaches the top level in destroying games also including destruction games. Get ready for the adrenaline filled gorilla attack while you help in greatest gorilla escape of our times never ever seen before in monster games. In this real gorilla simulator, the angry king kong on a mission of city escape where epic monsters need to go through the police and army to get back to the natural habitat. And this tells you how very exciting this city battle has become when the city destroyer monster hero on a city rampage for ultimate gorilla survival of this incredible monster. So let us add this rampage simulator to wild gorilla games in wild gorilla simulator in a new interesting gorilla attack game. We have placed our app along ape games because we know exactly what our audiences enjoy. It’s a new shade of wild animal games with angry gorilla attack.
Ultimate Gorilla Rampage BigFoot Monster City Smasher Wild gorilla, our latest in king kong games, kicks off in a mad scientist lab where ur real gorilla is stuck undergoing experiments. Away from its natural habitat this angry gorilla goes on a full fledge rampage where the epic monsters are on full throttle city smashers in destroy city to make it back to their natural home in an angry gorilla attack. This smasher city action involves gorilla attack on whatever comes in the way of this angry king kong who is fixed on an annihilate it all city rampage mission. The gorilla survival also includes the incredible monster hero, which is on a monster city rampage, fight against forces on land and air. Further on the city battle get more interesting when the bigfoot monster, that we’ve designed that you seldom see in other monster games & smasher games or also giant monster games plus giant rampage games, goes up against red hot forces attack that we have especially designed to be very deadly even for any other mad gorilla games, city destroyer games or even city destruction games. We have just entered the arena of monster rampage games in addition to super hero games with but we r sure we will make a permanent mark among destroying games or destruction games. You don’t see gorillas going against the whole city in wild animal games but only to make it back home.
Indulge in our wild gorilla games when you play our bigfoot games to get a pure taste of destruction games and destroying games where u also have to help the gorilla escape that has been missing in previous giant monster games alongwith city destruction games also included with giant rampage games. Do also invite your friends to these city destroyer games who generally love mad gorilla games. And yes one more surprise this app comes with a nice little cool gorilla dance move that is waiting for you to unfold it. While you get away from the mad city you can do a little dance celebration as well which was never there in monster rampage games before where you only usually see angry gorilla attack.