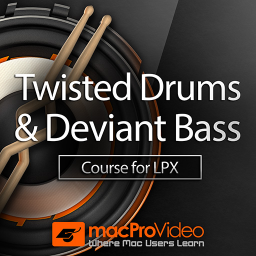 Drum and Bass Course for Logic Pro by mPV

Need to go beyond the basic presets and built-in functionality of Logic Pro X's new Drummer? Then be sure to watch as Nigel twists and tweaks some standard drum tracks into an EDM frenzy!
In the initial loop setup, you'll learn how to augment Drummer and Ultrabeat as well as repurpose drummer for trance music. Once the foundations of a track are laid down, you'll learn to slice, dice and speed up breaks to create old school, high energy jungle drum tracks!
As a bonus, there are several tutorials revealing the secret formulas to recreating classic EDM Basses using Logic Pro's synths. This includes the Dubstep Screech and Growl Basses, right down to Reese, Trance and Deep House Basses.
So if you're into twisting and deviating from the "beat"-en path and wanna take your EDM tracks to a higher level, this is your chance to follow our guru, Nigel Broad, and soak up some of his wicked wisdom!