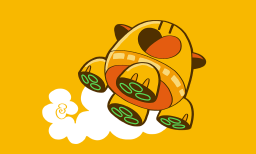 Tap, swipe and hold to guide Flip, The Last Rocket, through 64 rooms of spikes, fans, mines, flamejets and more. Collect all the scattered Memory Gears to help AMI, the onboard Autonomous Mechanical Intelligence, escape before the ship falls into a star! Featuring 8-bit graphics, twelve original chiptunes, multiple endings and five challenging achievements.

“The Last Rocket deserves a spot in every iOS gamer’s library.” —148Apps

“The Last Rocket conjures the Game Boy Color’s pixilation and cartoonish charms with the skill of a practiced understudy.” —Edge Magazine

“It’s almost worth it for the art style alone, but fortunately there’s a smart, well-designed puzzle game coated in that sharp aesthetic.” —Kotaku

“The Last Rocket will try your reflexes and test your wits, at the same time it steals your heart, girds your determination, and forces you to become a better player.”
–Pocketful of Megabytes

“Retro visuals have become such a staple they're beginning to feel like they're modern again, but Shaun Inman's The Last Rocket proves it's not just about the look, it's about the entire aesthetic of the game, from the simple and easy to pick up gameplay to the sounds coming out it — retro is a design principle, not just a pair of pixilated pants.” —Touch Arcade

“The Last Rocket is a charming distraction with a wonderful retro-chic art style.” —Pocket Gamer

“The game really shines in its later stages, when players must combine both brains and fast fingers.” —IGN