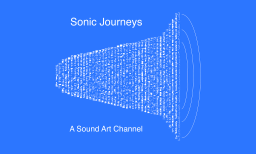 Sonic Journeys: A Sound Art Channel offers viewers a range of soundscape work focusing on a unique array of video/sound art from around the world. Much of the work at this time features the work of Richard Lerman. Other work will be added from the European group FKL (Forum Klang Landschaft) along with other artists and groups in the near future.

Current work has been focused on climate change recorded north of the Arctic Circle since 2014 to record the sounds from ice melting using carbon fiber rods, and hydrophones He has also recorded audio/video at sites along the US/Mexico Border; barbed wire at Auschwitz/Manzanar, internment sites in Chile and Alaska; rice paddies in Japan, ants/wasps nests in the Sonoran Desert; spider webs and more. Live performances include works for amplified tuning forks; metal being heated with blow torches, and amplified/bowed bicycles.

Lerman has taught at Arizona State University since 1994 where he founded the Media Lab. He has also taught at the Boston Museum School, M.I.T and Tufts University. From 1984-87 he directed the Sound Art at Mobius Series, Boston. Lerman has received fellowships from the NEA, Guggenheim Foundation, the Asian Cultural Council and others and has often collaborated with artist Mona Higuchi. Explore this unique world of sound art ad-free.