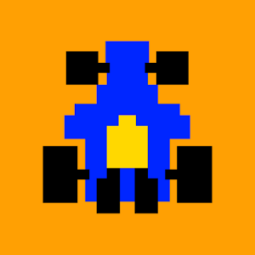 The player drives a blue car around a multi-directional, scrolling maze. The car automatically moves in whichever direction the controller is pushed, but if it runs into a wall, it will turn and continue. In every round, ten flags are scattered around the maze. The player must collect all of them to clear the round and move on to the next round. The flags increase in value as they are collected: the first is 100 points, the second is 200, the third is 300, and so on. There are also special flags (indicated by the letter "S") — if the player collects one of them, the value earned from flags doubles for the rest of the round. If the player dies, however, the next flag value is set back to 100 and the double bonus is lost. By collecting the special as the first flag with all 10 flags in one run, the maximum points the player can obtain from each round is 11,000. The player will also obtain a fuel bonus after the round is complete, the amount of which varies depending on how much fuel is remaining.

Several red cars chase the blue one around the maze, and contact with any of them results in losing a life when hit. The number of these cars begins at three and increases in number throughout each normal round to eight. The first five appear at the bottom of the maze, and the next three will appear at the top of the maze. However, the player has a smoke screen to use against the red cars. If a red car runs into a cloud of smokescreen, it will be momentarily stunned (but will still kill the player on contact). The amount of time stunned decreases with each level, but will still always cause the red car to chase the blue car using an alternate route. Using the smokescreen uses a small amount of fuel, and using it more than once every 30 seconds will almost ensure that it runs out before the round finishes.

The car has a limited amount of fuel which is consumed with time, though it is normally sufficient to last until all ten flags have been collected. When fuel runs out, the car moves very slowly and the smoke screen no longer works, so it very quickly falls victim to the red cars. If the player should clear any round without any fuel remaining (a rare occurrence), they will not receive a fuel bonus as a result.

On the third stage and every fourth stage after that, a bonus stage ("CHALLENGING STAGE") will start. The player must collect flags in the normal way, but the red cars (the maximum normal number of red cars, which is eight) are unable to move. If the player runs out of fuel, the red cars will start moving. If a player hits a red car or a rock, the challenging stage ends but the player will not lose a life. Once the player has run out of lives, the game will be over; if they had the highest score of the day, the game will tell them so.