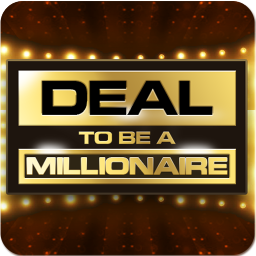 Deal To Be A Millionaire

Der Ranking-Verlauf zeigt an, wie beliebt Deal To Be A Millionaire im Deutschland.

How to become a Millionaire? Very hard in the real live but not easy in the: Deal To Be A Millionaire. You must think carefully to give a good answer for each round to get the biggest money as you can. The main target gets 1 million dollars.

- The game has 16 identical sealed boxes.

- There are 16 boxes on the wings each containing an amount of money between 1p and $1 Million.

- At the start of the game, the player selects a numbered box at random.

- The player’s aim is to sell that box back to The Banker for the most amount of money possible.

- In the first round, the player must choose five boxes before the first offer from The Banker.

- The Banker places his opening offer into the capsule. If the player successfully predicts the opening offer (within 10%) they gain a one-time use of the Offer Button, which can be pressed at any time during the game. When pushed, The Banker must immediately call to make an offer.

- MC asks, “Deal or No?” The player must answer, “Deal” to accept the offer or “No Deal” to decline the offer and carry on.

- Four boxes are opened in the second, third, fourth and fifth rounds, followed by the question from MC.

- If you decide to “No Deal” you will continue in this fashion until only two boxes remain.
- If you accept an offer by saying “Deal”, the game is still played out in exactly the same way, in order for the player to see what they could have won if they’d carried on.

- When the last two boxes remain, The Banker will give his final offer. If you say “No Deal” you will then go through to the final box opening in live play.