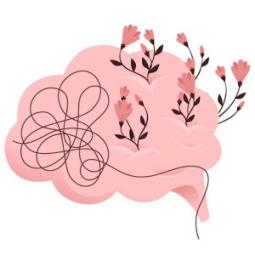 Note: The content in this app were made in the light of psycom.net (a mental health platform). The whole app is intended for fun and education purposes. For serious treatment plans and diagnosis, one should always go to a professional doctor or psychologist.

1) Depression: Depression is a state of low mood and aversion to activity. It can affect a person's thoughts, behavior, motivation, feelings, and sense of well-being. It may feature sadness, difficulty in thinking and concentration and a significant increase or decrease in appetite and time spent sleeping. People experiencing depression may have feelings of dejection, hopelessness and, sometimes, suicidal thoughts. It can either be short term or long term. The core symptom of depression is said to be anhedonia, which refers to loss of interest or a loss of feeling of pleasure in certain activities that usually bring joy to people. Depressed mood is a symptom of some mood disorders such as major depressive disorder or dysthymia.

2) Sociopathy: Antisocial personality disorder (ASPD or APD) is a personality disorder characterized by a long-term pattern of disregard for, or violation of, the rights of others. A low moral sense or conscience is often apparent, as well as a history of crime, legal problems, or impulsive and aggressive behavior.

3) ADHD: Attention deficit hyperactivity disorder (ADHD) is a neurodevelopmental disorder characterized by difficulty paying attention, or excessive activity and acting without regards to consequences, which are otherwise not appropriate for a person's age. Some individuals with ADHD also display difficulty regulating emotions or problems with executive function.

4) Bipolar Disorder: Bipolar disorder, previously known as manic depression, is a mental disorder characterized by periods of depression and abnormally elevated moods. If the elevated mood is severe or associated with psychosis, it is called mania; if it is less severe, it is called hypomania. During mania, an individual behaves or feels abnormally energetic, happy, or irritable. Individuals often make impulsive decisions with little regard for the consequences. There is usually a reduced need for sleep during manic phases. During periods of depression, individuals may experience crying, a negative outlook on life, and poor eye contact with others.

5) Schizophrenia: Schizophrenia is a mental illness characterized by continuous or relapsing episodes of psychosis. Major symptoms include hallucinations (often hearing voices), delusions, and disorganized thinking. Other symptoms include social withdrawal, decreased emotional expression, and apathy. Symptoms typically come on gradually, begin in young adulthood, and in many cases never resolve. There is no objective diagnostic test; diagnosis is based on observed behavior, a history that includes the person's reported experiences, and reports of others familiar with the person.