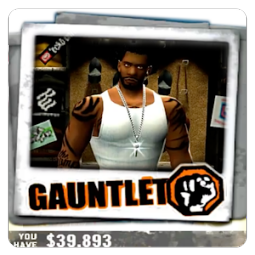 Battle Modes
• 1 on 1 - A single match between two fighters.
• 2 on 2 - A two on two brawl that ends only when both fighters on a team are knocked out or submitted.
• Free for All - A match between three or four fighters, where it's every fighter for themselves.
• Cage Match - No crowd interference, but the cage itself can be used to attack the opponent.
• Ring out Match - The wooden barriers lining the ring can eventually be broken, and the match can be won by throwing the opponent through the resulting gap
• Inferno Match - A battle in a burning building. Contact with the ring of fire damages fighters immediately. In addition, bits of flaming debris will sometimes fall from the ceiling, which can be used as weapons
• Demolition Match - Two SUVs form part of the arena, and fighters can use each other to mess them up.

Gameplay
• Def Jam Takeover emphasizes the use of the game's various environments and the surrounding crowd to cause damage. Tossing the opponent against barriers gives fighters an opportunity to inflict massive damage to their opponent by slamming them into the wall headfirst, ramming a door or gate in their face, or using other features of the environment. The crowd will shove a fighter back into combat if he is thrown into them or gets too close, sometimes holding a fighter and leaving them open to attack. Some spectators carry weapons, and will offer them to the fighters, or even attack a fighter if they are held by a nearby onlooker.

• Momentum is gained by successfully performing moves, countering, and taunting the opponent. The rate at which momentum is gained is effected by the fighter's Charisma stat, which like other stats varies between fighters. Created fighters can set their own charisma with a combination of clothes, tattoos, and jewelry; the more expensive, the better. A fighter with a good set of clothes, extensive tattoos, or laden with jewellery can often fill their momentum meter in just a few moves.

• Though the game focuses on mixed fighting styles, the only way to win a fight is through Knock Out or Submission. A character can be made to submit by putting them into submission holds until the health bar of a single body part is depleted.