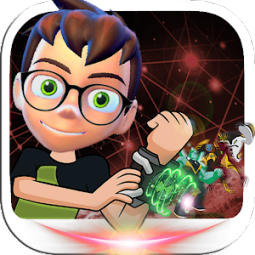 Ben Vs 10 Omnitrix : Endless Arcade Action running Is a game of power, adventure and action and excitement get ready to run and avoid being killed by ben's enemies when it’s red light stop when it’s green light go, save the earth and people from ben's enemies and be the hero of heroes and win the battles with the power of aliens against the enemies facing the aliens, you will face aliens and the power of evil creatures be brave and go, use your abilities and Omni-Enhanced to survival.

This is your challenge, Use the Omni-Enhanced and the power of these aliens Diamondhead, Heatblast, Stinkfly, Wildvine, Cannonbolt, Grey Matter to help ben to save himself from not being killed by the enemy of the squid game, always stop in the red light and move when it’s green it’s a game of survival you have so many abilities that would enable you throughout your journey against aliens, Ben Vs 10 Omnitrix : Endless Arcade Action running it's game of action and power waiting for hero like you to play it take the lead and guide ben to win against the aliens war.

Be the hero of the game.

Choose your hero or ben's aliens to be your heroes and start running when it’s green light however you have to stop when it’s green. A lot of surprises ahead of you get involved into the battles and cooperate with aliens to get the enemy down of the squid game.

Ben Vs 10 Omnitrix : Endless Arcade Action running it's a power game and also survival and challenging game own it Enable the power of your alien in the Omni-Enhanced and conquer the earth with ben, it’s your time to be like a hero NO! To be the hero this is your game, win it with the abilities of the powerful aliens. All you should do is run when it’s green light and stop when it’s red.

Be careful if you don’t you will get instantly killed, always stop when it's a red light and run in green light until you finish the race and you win the cash.

Discover also the higher and advanced stages and be ready always for the shock and help your ben with aliens he has run and keep himself from being killed run when it’s green light and stop when it’s green to survive this is the network land best cartoon ever and best aliens ever that you would see there is a surprise and challenge waiting for in this game Ben Vs 10 Omnitrix : Endless Arcade Action running is a game of action if you could win it! YOU WIIIN!!!

Critters in the game of power aliens will be ready to help you face your lumberjack learn how to run and be fast at defending and avoiding ben's enemies hits this game is your chance to be the hero let us see what you are capable of going slimier you are the super hero now the advanced and powerful aliens will definitely be the help you need to get to the summit.

10 or more aliens between your hand to fight with ben also an army at you feast, follow the game instructions when it’s red light stop when it green light go on and challenge yourself and win your battles against them beat the hell out of the evil and rank in the first places between your friends and compete on who’s going the first to achieve the highest stage or level smash them upgrade your potentials and be the stronger ben between your bodies steam them steamboat and steampunk.

Different aliens will be at your service to control the battle and win the game against these hateful enemies. It's a survival game to challenge your mates and see who’s gonna win.

Download Ben Vs 10 Omnitrix : Endless Arcade Action running now to immerse yourself in the super hot game and become the ultimate winner bringing home the prize of 86.9 billion won. Enjoy the game with friends and family, you will never be disappointed.