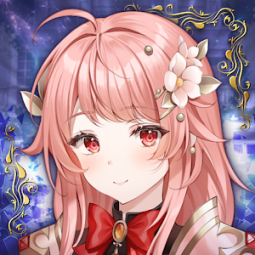 After an accident on the way home from your part-time job, you wake up surrounded by three strange girls dressed in what looks like armor…

Before long, you’ve been drawn into a deadly tournament of swords and magic with the ultimate prize: the King’s Crown, a mysterious artifact of incredible power. Your only hope for survival—let alone victory—is trusting in your newfound allies, but the longer you fight, the closer you come to uncovering the dark secrets at the heart of the tournament…

Can you beat the odds and forge your way to victory, or will you meet the same fate as so many others before you?

A tough and unyielding princess who upholds the honor of the tournament.

Despite her noble origins, she’s not afraid to fight on the front lines, sword and shield at the ready. When it comes to protecting her comrades, this warrior prefers a direct approach, and when danger comes knocking, Iris is always ready.

Why did she forsake a life of luxury and choose to fight?

A fun-loving girl more than capable of holding her own in a fight, Lumi is an elf that completely defies your expectations.

Always quick to find a silver lining no matter the situation, Lumi hides her fears behind her bubbly personality and easy charisma. Despite her relaxed demeanor, she wields an ornate halberd with ease and doesn’t hesitate to use it on those who threaten her friends.

What’s driving such an easygoing soul to compete in a life-or-death tournament?

A smart, calculating fighter who prefers observing from the back lines. Her mysterious past is a closely guarded secret, which holds painful memories that still haunt her…

Overseeing the battle with a keen eye and sharp wits, Kasumi uses a bow and arrow to strike exactly when and where needed. Although her strategy and precision are incomparable, she struggles to bond with her compatriots and relate emotionally to the world around her.

Will you be able to help her overcome her tragic past and face the future?