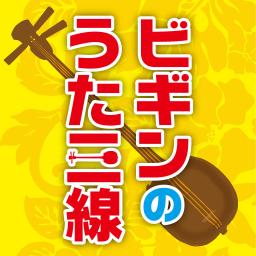 "BEGIN's Uta San-Shin," is an application for everyone to enjoy easily playing songs with the Okinawan band, BEGIN, on the Okinawan instrument, the San-Shin.
Because the San-Shin is fretless, if the player doesn't press the stings at exactly the right place, beautiful melodies won't emerge from the instrument. The right positions are known as, "Kan-Dokoro." These, "Kan-Dokoro," are shown through a score of Chinese characters known as, "Kun-Kun-Shi," which is displayed on the left side of the app to allow the player to easily master the basics of the game.
In Free-Play mode, while pressing the Kan-Dokoro and stroking the tap area, the user can experience the feel of truly playing the San-Shin with this app.
Furthermore, in Singing-San-Shin mode, along with the Kan-Dokoro appear original Japanese lyrics, so the player can sing while playing!
Because the tempo and key can be adjusted to the player's level, everyone can eventually master the San-Shin. When the player can stroke at the same speed as the members of BEGIN, they've become a master!
Additionally in the, "Ai no Te," corner, BEGIN's music includes both, "Ai no Te," and, "Yubi-Bue," indispensable parts of Okinawan music. Press, swing, and rock out!
For all lover's of Okinawa, this is an app for anyone to enjoy learning the San-Shin, or just having a great time while drinking with friends.

*All sampling was performed by BEGIN.

[!role-model!]
Automatically plays along with the Kun-Kun-Shi score. The recommended tempo is displayed in the lower left part of the screen, the tempo can be adjusted in the settings, and memorize at your own pace.

[!practice!]
The Kan-Dokoro light up, press them while playing.
*If the correct Kan-Dokoro aren't pressed, the next Kan-Dokoro won't be displayed.

[!challenge!]
The Kun-Kun-Shi score scrolls along the tempo set in the settings while the Kan-Dokoro light up. Try to play along with the tempo!