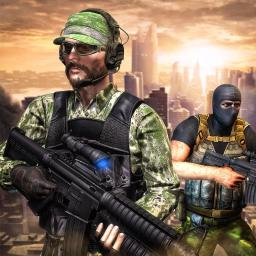 A team of U.S. government agents is sent to investigate the bombing of an American facility in the Middle East. As an elite commando member, the real assassin, the government has provided you with advanced weapons and equipment. Terrorists are planning attacks around the city. You are assigned to a special counterterrorism mission to execute critical early strike by the counterterrorism intelligence agency. Through your superb fighting skills, kill the terrorists, and save innocent civilians from terrorists lurking in a war-torn city. This is based on the modern shooting combat skills in commando missions, you have to survive through a series of missions to complete the final war. The goal of each game mission is to fight against terrorists, kill every enemy, and survive in the mission until you are the last man standing. You as a brave commando have accepted the challenging battle mission of going in the city, answer the call of war and destroy the terrorists. This mission is very challenging, storm into the battlefield of brutal enemies, to attack, hunt and destroy the enemy with the vicious muscle force.
Counter Terrorist Battle Arena is an action First Person Shooting war Game featuring a story mode and survival mode with high-end 3D graphics in crime city. You are the brave assassin in the army, aim to shoot the terrorists who are masked, armed with AK47, MP4, and carrying destructive weapons. Aim at the opponent's head and shoot, so that those ferocious terrorists are left nowhere to escape. You need to master practice a variety of targeted gunshots, excellent precision target training in survival mode will help in the frontier shooting war, better eliminate all targeted terrorist organizations. You can carry a variety of weapons, like AK47, M4A1, machine guns, snipers, MP5, handguns, pistol, shotguns and medical kits. Travel deep into enemy control zones, sneak & kill terrorists, and keep in mind, your mission during anti-terrorist action in different places is to shoot and destroy terrorist organizations. Open the lens, zoom and identify the target, locate, aim, inhale, pull the trigger, shoot to kill.
Counter Terrorist Arena is an epic FPS shooting game. Accept the ferocious and exciting missions.
Download Now from the Apple store and enjoy the unlimited action.

Counter Terrorist:Battle Arena was not featured in iOS in Deutschland on 20 Jun 2018.