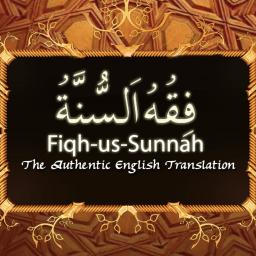 Fiqh-us-Sunnah was written by Sayyid Saabiq (1915-2000 C.E.), and it is considered the first writing of its kind for it brought the four major madhahib together, in a comprehensive treatment of Fiqh matters. The book has since been translated into dozens of languages and is used by Muslims throughout the world. This app is the certified and authentic English translation of this book. You can view topics by specific chapters, search for a particular topic, take notes for a topic for future reference, bookmark any of them as favorite for future reading, and share them from the App through email, FaceBook and Twitter.

Features:
•Ability to set a reminder to read a random topic daily. It alerts you on set time with Topic of the Day.
•Ability to swipe back and forth to read next, or previous Hadith.
•Ability to perform a full text search which not only shows you the records but also highlights your searched text.
•Ability to read topics of your interest.
•Ease of reading through the whole book like a hard copy.
•Ability to take notes for a particular topic for future reference.
•Ability to bookmark topics to keep track of your last read topic so you can simply go to that topic and continue from there.
•Ease of maintain favorites list by marking any topic as favorite.
•Integration with Facebook, Twitter & email to share topics with your friends and family.

About Sayyid Saabiq:
Sabiq wrote Fiqh As-Sunnah in the 1940s when he was only 30 years old. He wrote the book at the request of Ustadh Hassan al-Banna, the founder of the Muslim Brotherhood. Every Fiqh ruling in the book goes back to the Qur'an and Sunnah and Sabiq dealt with all four madhahib objectively, with no preferential treatment to any. Sabiq also wrote the book, "Islamic Theology," along the same lines: simplification and avoidance of overphilosophization or getting involved in disputes on arcane topics. Besides his academic work, Sabiq was a noted Islamic activist. After writing Fiqh As-Sunnah, Sabiq spent some time fighting along with the Mujahideen in Palestine in the late 1940's and he later visited most countries in the world and lectured in their mosques. He was the first graduate of Azhar to visit the Soviet Union and check on the conditions of Muslims there. Sabiq was born in 1915 in the Egyptian village, Istanha. He received his education at Al-Azhar and after his graduation worked as the Director of Mosques and Islamic Education in the Egyptian Islamic Affairs Ministry. He also taught at Al-Azhar, and later moved to Saudi Arabia, where he headed the Shari'a Graduate Studies Department in Um Al-Qura University. After moving back to Egypt, he spent years teaching students in a Mosque in Cairo.

If you notice any bug in the app please send information to hadithbooks@gmail.com. Suggestions and queries are also welcome. Thanks!