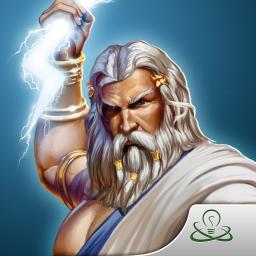 Conquer the world of Grepolis! Begin by expanding your village in Ancient Greece. Grepolis is a free strategy game in which you build your own empire and strike back against your enemies with the help of allied players and powerful alliances.

Now the heroes of antiquity are entering Grepolis! Legendary and powerful heroes, such as Leonidas, Hercules, Andromeda and Helena, help your city or army with their unique powers and strengths.

Play the free app and drive the expansion of your city forward quickly and easily. Use the powers of the ancient Greek gods Zeus, Athena, Hera, Poseidon or Hades, and summon with their help mythical units such as Pegasus, Medusa, Cyclops and the Minotaur. Forge powerful alliances with thousands of real players and friends.

Prepare for epic battles and support your alliance in the struggle for domination in the world of Grepolis.

FEATURES
- FREE strategy game
- Begin with a city and turn it into a mighty empire
- Battle against players from all over the world and conquer their cities
- Build your army out of 27 different kinds of units and lead them into war in real time
- Choose a god and use powerful spells
- Recruit heroes of antiquity and deploy them in your army or city
- Trade with other players
- Research 30 useful technologies
- Build 13 different constructions
- Fight side by side with real players in alliances
- Continue playing in your PC browser at www.grepolis.com

Grepolis - Strategie MMO was featured in iOS on 2 placements in Deutschland on 19 Aug 2018.