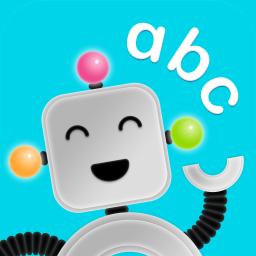 Features:
* Baby Mode auto advances through interactive letter toys
* Explore Mode lets kids discover interactive letter toys at their own pace.
* Sing Mode lets you sing the alphabet song along with 26 dancing robots.
* Trace Mode includes letters, words, custom words, alternate tracing strokes, and left-handed support. Earn Stickers and Stars to help see what is being traced the most or the least.
* Type Mode teaches little ones where to find letters on the keyboard while typing words.
* Add your own photos and words to the app, and they will appear in all modes except song mode.
* Choose lowercase, uppercase, or mixed case.
* Phonic Sounds.
* Choose a British or American accent.
* Fun and upbeat Original Music - keeps you dancing, not wincing. (parent friendly!)
* Sing along to the Alphabet/ABC song!
* Develops reading foundational skills.
* Great for Educators and Therapists to help with language and pre-reading.
* Aligned to Kindergarten Reading Foundational Skills in Common Core State Standards.
* Universal app for iPad/iPhone/iPod.
* Safe: No in-app purchases.
* Safe: No ads.
* Safe: No social media.

Winner of 2010 Best Kids App for iPad at iLounge!
Featured in the App 2010 Rewind in the Tech for Tots Category!
Selected as on the of 10 best iPhone apps for pre-readers at babble.com!
Selected in top 8 apps for kids (2010) by macstories.net
Featured 4-star (highest rating) app on kidseducationalapps.com
Featured as New and Noteworthy by Apple!
Featured as a select app in 2010 by Apple!

Reviews from the press:

“To say that we were impressed by Interactive Alphabet – ABC Flash Cards would be an understatement – it is truly one of the very best iPad applications yet developed, and a fantastic value for the price. The colorful art, charming music, wonderful activities, and attention to detail make this a ‘go-to’ title for teaching kids the alphabet, as well as real world uses of letters. That it works with the iPad as well as the iPhone and iPod touch is just icing on the cake.” - iLounge

"The thing I like about this entire app for toddlers is the way it was so well thought out for kids. It isn’t just a bunch of letters, it’s a full interaction that helps them learn on a few different levels." - tcgeeks.com

"…a lovely way to experience the alphabet, that kids will want to play it over and over. " . . "We legitimately couldn’t find anything not to like about this app." . . "The Bottom Line: A top pick for babies, toddlers, and preschoolers." - bestkidsapps.com

"Interactive Alphabet is guaranteed fun time with your young ones." - funeducationalapps.com