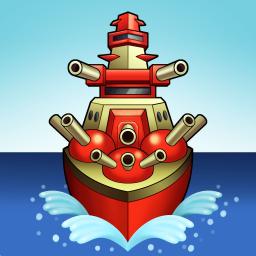 Naval Warfare is a classic strategy board game. It uses Game Center Turn-based multiplayer system. It is easy to pick up and instantly engaging. The game is pretty straightforward, allowing you to invite your friends or random opponents to play a turn-based game. You make a move, your friends make their moves at their convenience, and so on.

Be the first to sink all of your opponent’s ships!

Rules:
Each player starts the game with 4 shots. Each time a player's 2 SHIPS are sunk, that player has one fewer shot in subsequent turns.

-Play with real people. No single player mode, no AI, just human beings. The game is multiplayer only.
-Game Center Turn-Based Multiplayer System allows you to play against many opponents at once.
-Notifications will inform you when it's your turn.
-Communicate with your friends or just random opponents through in-game chat.
- Rematch (requires iOS 6 and later)
- Add opponent as a friend