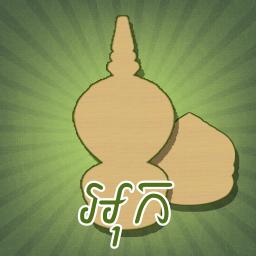 The first type of Cambodian chess game is known to the Cambodians as Ouk Chaktrang.

The name “Ouk” was believed to come from imitating the sound made between the chessman and the chessboard while checking. As terminology and rule are concerned, the word “Ouk” means check, and it is required to say out loud by the player who checks the enemy King.
The game is also named “Chaktrang” is formal and derived from Indian, Sanskrit Chaturanga.

Like the international chess, Ouk Chaktrang requires two people to play against each other, but in Cambodia there are always two teams of people participating in the game. This does make every game played even more exciting and entertaining. People, I mean Cambodian men, usually gather to play at a barbershop or Cafe shope for men in their town or village.
The object of Chaktrang is also to checkmate the opponent’s King. In the beginning, who should move first is simply a matter of agreement between the players. However, for the next game, the loser usually has a privilege to move first. If the first game was drawn for some reason, once again the mutual agreement decides for the matter in question.