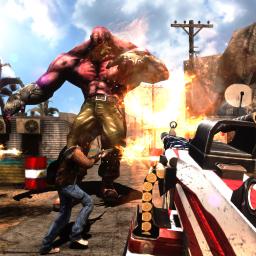 MODERN MULTIPLAYER COMBAT
> Team up with friends or strangers and shoot some zombies in adrenaline pumping fights - up to 4 players in co op survival, up to 6 players in Team Survival
> Take down waves of zombies and powerful bosses with your fellow survivors
> Epic team clashes in Team Survival (PvP + PvE) and Team Deathmatch (PvP)
> Join games va automatic matchmaking or create custom private games

SOCIALIZE WITH PEOPLE
> Chat online with other players in global and country chat
> Compete for high score in worldwide and friend leaderboards
> Add and find friends, make new ones - friend requests available during online play. Simply tap the person's name, and send friend request!
> Unlock achievements in single and multiplayer

CUSTOMIZE YOUR CHARACTER
> Multiple character avatars
> Customize the look of your character with hats, glasses, masks and more!

CUSTOMIZABLE CONTROLS
> Intuitive, smooth, highly customizable controls so you can play just the way you want

This is just the first early release, there MUCH more to come! Please like our Facebook page for updates.
https://www.facebook.com/ragezfps/

If you liked left 4 dead, killing floors, dead island, z world war, you'll like this one too :)

This game allows you to purchase virtual items within the app and may contain third-party advertisements that may redirect you to a third-party site.