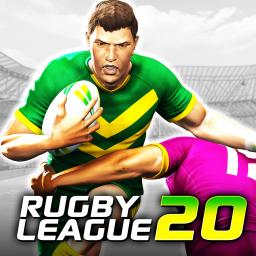 The store's greatest Rugby League sim takes you to the World Cup!

Choose your team from a selection of 25 brand new international Rugby League teams and take on the best players, from around the globe, to take home the ultimate trophy - The Rugby League World Cup.

Not only that but play in the National Leagues of England or Australia and destroy the opposition. Or, create your very own team and climb the ranks to the very top, building your team of players and upgrading your stadium as you go. Rugby League 20 provides many many hours of sporting action.

Includes fully updated teams, a wide range of gameplay improvements, stunning 3D visuals, fingertip controls and controller support - this is the most complete Rugby League game you can get on your iPhone or iPad.

So... get ready to play the Rugby League game that delivers the power, speed and intensity of one of the World’s most enthralling sports.

WORLD CUP ACTION
Starting in the group stages of the competition you take direct control of your team’s every move, where every pass and tackle has to be executed with precision in order to overcome the opposition. Progressing to the knock-out stages means an even higher level of concentration is required but every hard-fought try takes you closer to your goal of taking home the silverware.

BUILD YOUR OWN TEAM
Are you up to the challenge of building the World’s greatest Rugby League team? Collect and build a team of players that you can train up to take on the very best opposition. Design your kit, create your team name and upgrade your stadium to fill it to capacity with crowds of adoring Rugby League fans. Then, win the league to earn promotion and get ready to take on the next level of opposition. Can you become champions of the All Star league?

ONLINE LEAGUE
Take on other players’ teams from around the World in the all new Weekly Online League. Battle it out to win prizes and rise up the rankings to prove who is the best.

NEW CONTROLLER SUPPORT
Take to the Rugby League field with the all new Bluetooth game controller support! All the Rugby League action you can handle is now at your fingertips in a whole new way.

NATIONAL LEAGUES
Take part in the English or Australian Leagues and crush the local opposition in style. Earn exclusive rewards including highly skilled International players to boost up your own team! Are you the best in the nation?

REWARDING GOALS
Earn great rewards every single day by completing Rugby League goals, build up your team over the long term to earn even better rewards!

FINGERTIP CONTROLS
Whether you are a seasoned rugby pro or just getting started, show off your rugby skills with intuitive controls. Use the on-screen virtual buttons to guide your players around the field. For that extra bit of rugby flair, use swipe gestures to sidestep the oncoming defenders.