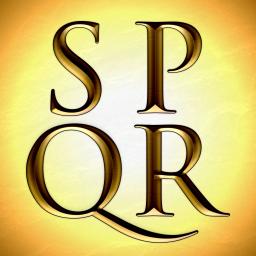 SPQR is the ultimate learning tool for Latin students who want to immerse themselves in the language, presenting the most comprehensive Latin dictionary on the App Store, dozens of Latin texts with English translations, a grammar tester, flashcards, quiz, numeral converter, quotes of ancient wisdom, language learning tools and more.

- Full copies of classic texts in their original Latin, grouped either by author or genre, including: the Gallic War and Civil War by Julius Caesar, Res Gestae by Augustus, the Twelve Caesars by Suetonius, the Amores by Ovid, the poems of Catullus, the Aeneid, Georgicon and Eclogues by Virgil, Pliny the Elder and Younger, the Metamorphoses by Apuleius, five landmark speeches by Cicero (including In Verrem!), plus Horace, Juvenal, Vitruvius and more!

- Our built-in classics quiz has over 4000 questions on the ancient world to test your knowledge.

- Set Access Controls to restrict features based on student needs.

- PLUS: take advantage of the integrated Roman numeral converter, experience Caesar's Gallic War in word-for-word mode, try your hand at the Sortes Virgilianae, get up close to Ancient Rome with our exclusive photo collection, and more!

*** WHAT USERS ARE SAYING ***
"I teach both high school and college Latin classes. This is a great tool. To the creator: gratias multas! Everything he/she writes on the app advertisement page is accurate." - Magister McNair

"Wow... This has to be the best app I've ever spent money on. You could spend months just reading all the content it has, and the dictionary is just as useful as any official one." - Toop777

"The sheer volume of material is nearly overwhelming. Definitely worth the price." - Kevbo SF

"I bought this app a couple of days ago, and am still coming to terms with how fabulous it is... If you love (or even like) Latin, I can't imagine you could be disappointed with this app. It does all that the creator promises, and it does it oh so well." - TuTubusLatinus

"This app is a Swiss Army Knife of Latin resources. As it is it's good enough for anyone who is comfortable reading Latin and wants to keep his classic texts all in one convenient app." - Jerrykim