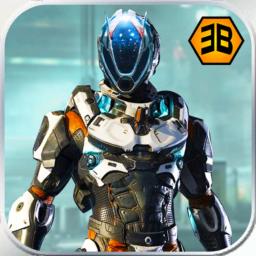 Robot war is all about robot fighting; war robot is going to be your craze if you are love playing robot shooting games. In this futuristic robot game you are a bot with highly secret mission, for shooting steel robots you have to go in every part of futuristic sci fi environment for completing the challenging missions. Keep in mind that in secret buildings of sci-fi realistic environment, there are sniper robots on duty to stop you. Your duty is to stop the robot battle by killing all robo and keep moving forward until transformers fight is end in the battlefield.

Aim your enemy's bots and destroy them by hitting fire button. Throw bombs and keep shooting as fast as you can. You can increase your strength and stability by upgrading your Mech robot terminator. Wipe out the future unfriendly robots and turn them into dust!

In this shooting robot game, there are different challenging levels in this street fight of steel robots. This sci fi robotic street fight is worth playing, this robotic war is going to be held between transformer steel robots and player robot shooter. These futuristic robots in this war robot game are alien robots like iron man, they came from other world and they want to capture most modern scientific lab. Let me tell you that this robotic fight in this shooting robot game is with other robot strike force. You may have played many other shooting games but this steel robot shooting in this robotic fight game is worth playing. In this robot war game the opponent are not humans but the alien robots from the other world. The robot force that will fight in robotic fight is consisting on real robots who are savior of this planet.

In this futuristic steel red robot transformation game you have to shoot maximum zombie robots to earn maximum scores that will help you to purchase more advanced guns for shooting the enemy robots.

Stahlroboter-Kriegsführung 18 was not featured in iOS in Deutschland on 23 Mai 2017.