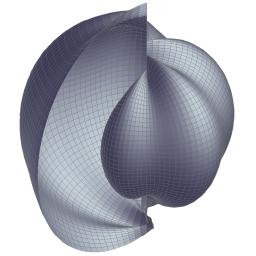 AepCalc is a reverse polish notation (RPN) scientific calculator designed for use on a computer. That last point may seem obvious, but rarely do computer calculators seem to be designed for computers. AepCalc reverses this trend by…

...placing on icon on the menu bar so that it's always just a mouse click away.
…offering an 'On Top' mode that allows AepCalc to float above other apps.
…mapping the keys of AepCalc directly to the keys of the right side of an extended keyboard, so that users don't have to remember hotkeys or use on screen buttons
…shrinking down to the bare essentials once a user learns the keys in order to conserve valuable screen real estate.

AepCalc also offers a number of other nice features such as a hexadecimal mode and a clever memory facility, in addition to the standard scientific calculator functions.

"...I just wanted to let you know that I've found your RPN calculator to be very useful over the years. It's one of the first things I install on a new computer, and it goes on the outer edge of the quickbar so I can pop it up in an instant. I've bought several other RPN calculators but none are as fast and convenient to use as yours, and rarely do any of the others even get installed. Selfishly, I wish you had gone on to develop it further, and to do similar utilities. In any event, I just wanted you to know that at least one customer found great value in your work." - John Dunn