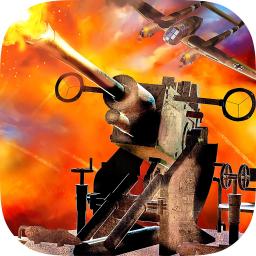 Take part in the Eastern front brutal battles of the Second World War. Can you survive all the attacks as a soldier in the air defense division of the Red Army? Are you able to protect military and civilian objects? Your Motherland counts on you.

• Dive into the history of the Nazi Germany invasion to the Soviet Union in 1941.

• Go through the campaign with large-scale terrifying battles for more than 100 levels.

• Upgrade and repair your strategic facilities to withstand the attacks of the enemy.

• Upgrade your anti-aircraft weapon to fight back all kinds of Luftwaffe aircraft from light ones to super heavy bombers.

• Feel awesome graphics and sound effects, making you believe that you are actually in the middle of a battlefield of the WWII .

• Enjoy explosions and realistic destruction of enemy aircraft, but do not forget that if the enemy will reach you, it will be able to destroy objects you pledged to protect.