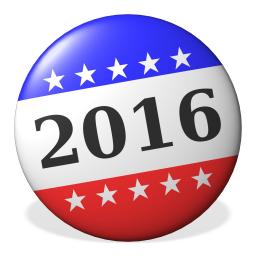 Have you ever wondered what if? What if 2016 had gone differently, if perhaps your candidate had had a bit more money, been a better candidate, or just been a bit luckier? What if someone else had run? What if a third party candidate had just as much money to spend? Or maybe even significantly more? What could you do with a hundred million dollars? A billion? Ten billion? What if there were four competitive parties? How would that change things? What if there were no established parties running at all?

With Election Manager 2016 you can answer those questions and more... Try running an election on a shoestring or with an unfair advantage. Run as a Democrat or Republican, manage the Libertarian or Green ticket, or go completely independent. Let your adviser make all your decisions for you, or micromanage every decision yourself, or anything in-between. The choices are all up to you.

Election Manager 2016 is an abstract strategic election simulation game where you manage your ticket in an attempt to get your candidate elected to the office of President of the United States. Election Manager comes with a variety of scenarios, from a recreation of the 2012 election to a four-way election between independent parties. In addition, almost any imaginable two-to-four way election scenario can be designed by the player.

The Election Manager 2016 engine uses actual historical and demographic data to produce reasonable election results, taking into account factors such as partisan lean and voter elasticity. The player will not only have to consider states but also media markets, giving the game a strategic dimension due the inefficient mapping from one to the other. For instance, to target New Jersey's 14 electoral votes, the player would have to spend money on ads in the Philadelphia or New York City markets — but significant portions of those markets are actually in other states. So is it really worth spending that money there, or would it be better spent going after other states instead?

While Election Manager aims to give you complete control of your strategy, it also comes with tools to help you manage it — up to and including an AI campaign manager to which you can delegate any part (or all) of your strategy, from campaign stops to ad buys to state offices to polling. Game features include:

• Completely customizable scenarios, including pre-built 2012 and hypothetical 2016 scenarios
• Scenarios for two to four parties
• Run a Democratic ticket, a Republican ticket, or any number of third-party or independent tickets
• Single player or hotseat multiplayer
• Set up campaign and fundraising stops for your candidate
• Plan your ad strategy for every market in the United States
• Use ads to attack your opponent, or boost your campaign with positive ads
• Set up campaign offices in battleground states
• Handle everything yourself, delegate everything to your AI campaign advisor, or anything in-between
• Tools to help you plan your polling or ad campaigns or budgeting
• Data and maps and lots of it